What to Expect as China’s Economy Enters 2021

2020 was a turbulent year for global economies due to the COVID-19 pandemic, with the IMF projecting global growth contraction by 4.4 percent – the worst recession since the Second World War.

However, China – despite being the pandemic’s epicenter – was the first and only major economy to recover and enter 2021 with a relatively optimistic outlook. Beijing’s stable and time-sensitive policy responses, epidemic control strategy, and reprioritization of macroeconomic objectives ensured that it was the sole G20 economy that experienced positive growth in 2020. In fact, it is estimated that China’s Q4 growth returned to pre-pandemic levels.

Economists estimate that China’s GDP will grow by five to six percent year-on-year from October to December 2020, returning the economy to its pre-pandemic levels – China’s GDP growth rate in 2019 was revised to six percent.

In October last year, the IMF forecast that China’s GDP would grow 1.9 percent in 2020 – an adjustment from the one percent it predicted in June. At the same time, the IMF projected that GDP growth of developed economies would shrink by 5.8 percent and emerging markets would shrink by 3.3 percent in 2020. This meant that despite the conservative estimate, China was an outlier. 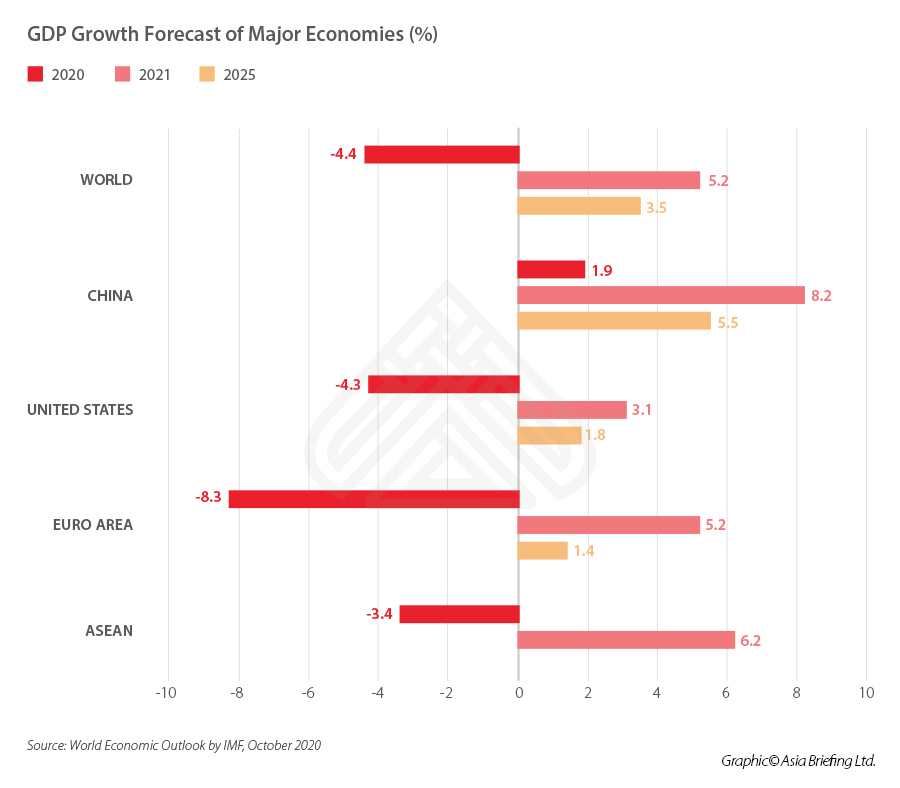 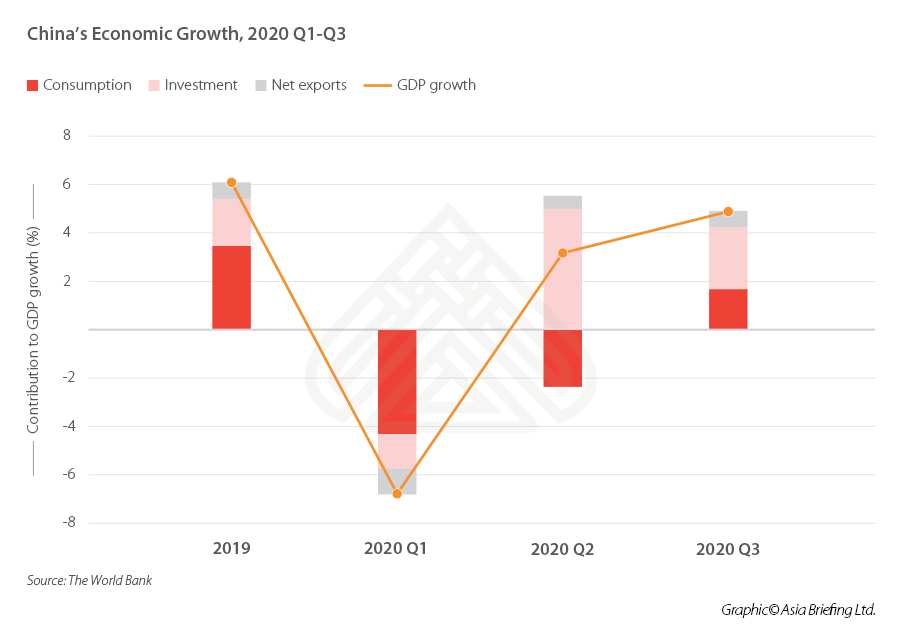 China’s economic rebound was driven by a combination of factors, including massive investment in infrastructure and real estate, export booms boosted by the strong global demand for medical supplies, medical equipment, and electronics, and the steady pick-up in domestic consumption after a long period of sluggish growth.

Compared with the weak base in 2020, many analysts expect China’s economic growth will reach around eight to nine percent in 2021.

China’s return to economic normality could mean policy normalization this year. But a balance will need to be struck by top policymakers between restarting economic reforms and not killing growth.

In the recent Central Economic Work Conference, top policymakers were cautious about making major changes to the country’s stimulus policies and pledged to maintain continuity in macroeconomic policies in 2021.

Recently, the State Council extended measures on allowing small and micro-sized enterprises to defer loan repayments; two ministries required small-value government procurement projects to be entirely commissioned to small and medium-sized enterprises (SMEs). These are signs that national leaders think that full recovery is not yet completed and they will continue to support small businesses and stabilize employment.

On January 6, China’s central bank outlined key policies in 2021, saying that it would implement a prudent monetary policy that is flexible, precise, reasonable, and moderate. Policies on inclusive loan repayment extension and credit loan support program for small business will be prolonged. At the same time, the central bank will channel more financial resources toward green development and promote opening-up in the financial sector.

On the other hand, China is starting to re-emphasize the “high-quality development” of its economy, which implies the revival of its ambitious economic reforms – supply-side reform and the recently proposed demand-side reform are back on Beijing’s policy agenda.

In addition to eliminating excess and backward production capacity, de-leveraging the economy, and moving up the value chain, China is planning to shift some of its focus on reforms on the demand-side, after COVID-19 left many lower income Chinese consumers without financial cover and further widened the gap between the rich and poor.

China’s domestic consumption accounted for 55 percent of the GDP in 2019, making it an important engine of economic growth. However, in 2020, consumption slowed down dramatically in the initial months due to the pandemic but started to pick up in the second half of the year – albeit at a slower pace than industrial production – after registering positive growth starting August.

The country’s consumption power has thus proven to be relatively resilient, benefiting from China’s high household saving ratios. During this year’s Double 11, for instance, total sales on all e-commerce platforms were up 31 percent over last year and reached RMB 410 million (US$58 billion), far more than the Cyber Monday and Black Friday online sales combined, according to McKinsey.

High-end consumption and sales of luxury goods, cars, and homes also witnessed a rebound. High-end malls in China saw their sales grow 25 to 35 percent compared with 2019. According to a joint report by Tmall Luxury and the consultancy firm Bain, the luxury goods market in mainland China was set to achieve a 48 percent growth in 2020 – even as the global luxury goods markets was projected to shrink by 23 percent, implying the enormous spending power of China’s wealthy class.

Nevertheless, the income and spending gap between the rich and poor has widened significantly under the pandemic, resulting in China’s overall sluggish consumption growth. According to McKinsey, China’s household deposit balance increased by eight percent over the first quarter to reach RMB 87.8 trillion (US$13.54 trillion), which was concentrated in high income households. Lower-income households make up most of China’s population and they remain unwilling or are unable to spend after setbacks during the pandemic.

At the December 15 meeting of the Politburo, China’s top policymakers proposed what they called “demand-side reform”, expected to focus on optimizing the income distribution system, social security network, tax regime, and transfer payments – to enhance the purchasing power of the country’s low to middle class households.

Externally, a big risk to China’s economy normalizing could be continued friction with the US.

In 2018, US President Donald Trump launched a trade war with China due to the widening US trade deficit. Yet, two years later, the trade war’s retaliatory tariffs (followed by détente based on China agreeing to buy more US imports) has not impacted the US trade deficit as much – due to the pandemic.

While US trade deficit with China shrank by 8.5 percent in 2019 – it increased by 5.4 percent in the January-November period of 2020; it now accounts for 37 percent of the US total trade deficit.

Moreover, despite Trump’s efforts to push US manufacturing home, most American businesses in China do not plan to leave, as is the case with EU and Japanese companies. China’s lucrative market, superior manufacturing capacity, wide sourcing networks, sophisticated supply chain infrastructure, and management of COVID-19 – cannot be easily replaced, either in the US or in other emerging markets. 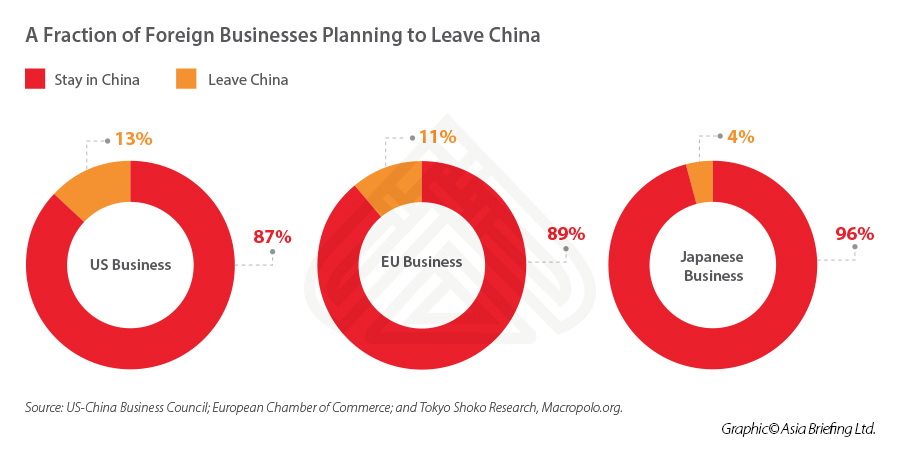 According to IMF forecasts, if China does achieve eight percent growth this year, with forecasted domestic inflation and currency appreciation, the size of China’s economy relative to the US could be more than 75 percent. Thus, going forward, the incoming US President Joe Biden’s stance on China is likely to remain tough.

Biden will take over as America’s 46th president on January 20 and has said that he will not immediately roll-back the Trump administration’s additional tariffs on China. Also, many analysts expect that Biden would seek collaboration with America’s traditional allies to jointly contain China. Biden and his diplomatic team have made it clear that they intend to pursue a strategy of multilateralism to repair relations with Europe and other allies – although this will take time due to the massive trust deficit engendered by the outgoing Trump White House.

Still, many expect US-China tensions to ratchet down in the short-term as bilateral relations will get handled in a more conventional and predictable manner under the Biden administration. The US is also unlikely to impose additional tariffs and may opt instead to strengthen channels of communication and cooperation with Beijing over issues like global climate and epidemic prevention.

While the “dual circulation strategy” (DCS) triggers concern among some that China is looking inwards, the resultant policy reorientation has actually been followed by a shortening of the negative list and expansion of the encouraged catalogue to relax market access for foreign investment.

China also signed on to the Regional Comprehensive Economic Partnership (RCEP) with Asia-Pacific economies and politically agreed to the EU-China Comprehensive Agreement on Investments (CAI) before the close of 2020. These reflect that China is still committed to opening-up.

What DCS as a strategy hopes to achieve is a reduction in China’s external dependence on unpredictable foreign markets while tapping into its home ground advantage – a vast and diversified domestic market.

Breaking this down further – China particularly wants to reduce its dependence on two types of imports.

This does not mean China will immediately stop imports. On the contrary, it will seek to retain maximum access to global suppliers. In case of possible international resistance, China may also capitalize on foreign knowhow – inviting greater foreign investment in certain sectors at home to secure its local industrial and supply chain, and in the long run, build its own capacity in these high-tech and critical areas.

China has experienced sporadic outbreaks, mostly small, across the country throughout the year. Recent outbreaks were recorded in Hebei, Beijing, Liaoning, Heilongjiang, and Sichuan. But overall, China has acquired the ability to rapidly control the spread of the virus through close contract tracing systems, swift lockdowns, and large-scale nucleic acid testing.

Starting mid-December, China widened the inoculation scheme to more high-risk groups nationwide, including workers in customs, medicine and healthcare, the cold chain industry, public transportation, produce and seafood markets, and those traveling to medium or high-risk areas for work or study, in an effort to stem a COVID-19 resurgence in winter and spring.

So far, nine million COVID-19 vaccine doses have been administered in China, according to National Health Commission official Zeng Yixin. The government says it will provide the COVID-19 vaccine free of charge to the general public.

As the vaccine roll-out continues, coordination among the country’s provincial health authorities, effective data tracking systems, and public cooperation should ensure that China has a bigger chance than most countries of containing any new outbreaks – key to stabilizing its economic performance in 2021. Overall, China’s economy is expected to continue on its path to moderate recovery will remain a popular destination for foreign investment as long as its supply chain stays resilient.