Navigating Asia’s geopolitical landscape in the current context of the COVID-19 pandemic can be difficult for most foreign businesses. This is more so when moving business activity out of China.

Vietnam features high on the radar for foreign businesses scaling up or choosing alternate sites outside China due to its success in creating an adaptable production base – that is geared toward higher-value manufacturing.

While most can agree that Vietnam’s infrastructure and supply chain network cannot match that of China’s, the government has been making strides to bridge that gap. In addition, many manufacturers are using Vietnam to support their China +1 strategy by maintaining key operations in China and supplementing them with operations in Vietnam.

To illustrate this – we take an in-depth look at Guangdong province in China, which launched several incentives and cost-cutting measures to offset the impact of the worsening US-China trade war and Quang Ninh province in northeastern Vietnam, which ranked on top in the 2019 Provincial Competitive Index, a collaborative report by the Vietnam Chamber of Commerce (VCCI) and the US Agency for International Development (USAID).

We compare both provinces and highlight how businesses investing in Guangdong can use Quang Ninh to supplement their operations. Both Guangdong and Quang Ninh have a different set of strengths, respectively, and multiple factors need to be accounted for when considering supply chain networks. Investors should consider the following factors if planning a manufacturing shift from Guangdong or a similar manufacturing hub. 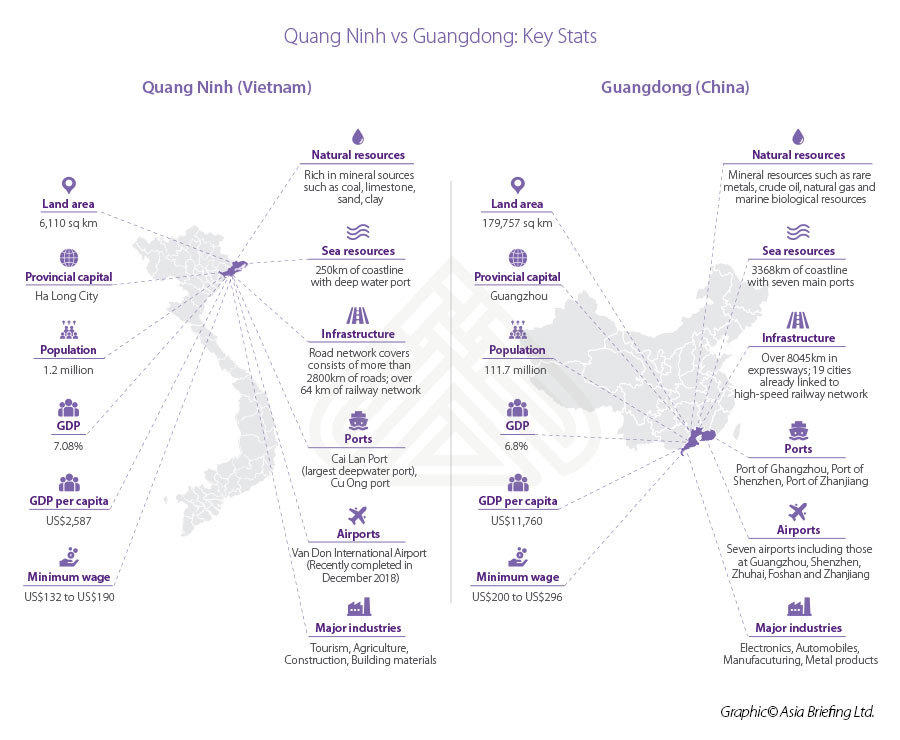 An introduction to Quang Ninh

Quang Ninh is a strategic investment location in northern Vietnam and part of the economic triangle in the North (Hanoi – Hai Phong – Quang Ninh). It is home to the world-famous and UNESCO World Heritage Site Ha Long Bay.

For three consecutive years, Quang Ninh has consistently ranked at the top of the PCI. The province recorded US$6 billion in FDI since 2014 and is host to over 15,638 businesses. Foreign investors in the province include the US, Japan, Singapore, and Thailand.

In addition, the government has laid out its vision for 2014-2030, planning important infrastructure projects to promote industry and trade in the province. In particular, the government intends to establish the Van Don district, a special economic zone, as a go-to investment destination.

The district will focus on developing logistics, high-end tourism, and entertainment, including opening a casino. The local government plans to transform the district into a start-up and business hub along the China – ASEAN business corridor.

The government plans to base the economy on three pillars of tourism, culture, and innovation. Van Don district which also houses the Van Don Economic Zone has attracted over US$2 billion to date in infrastructure investments.

With its geographical location and access to highways and seaports, close proximity to China, and the government’s push to attract FDI, Quang Ninh bodes well for investors looking to shift equipment, save costs, and expand trade with its ASEAN neighbors.

An introduction to Guangdong

Situated in the heart of China’s Pearl River Delta manufacturing hub, Guangdong is the center of China’s export industry. It is the southernmost mainland province with one of the largest coastlines in China at 4,300 km. The province is adjacent to the financial center of Hong Kong and entertainment hub Macau and is known as China’s economic powerhouse.

Guangdong is known for its light manufacturing industry, although the province has been making a shift towards heavy, new, and high technology industries. Guangdong is a major export market for Hong Kong, the US, Japan, South Korea, UK, Germany, and ASEAN. It accounts for nearly a third of China’s total exports.

The Chinese government aims to invest more than US$65.46 billion in Guangdong until 2020 in strategic and emerging industries, such as IT, high-end equipment manufacturing, green and low carbon, biomedical, new materials, and marine economy. China wants to attract more companies to invest in / augment its electronic and automobile supply chains.

Guangdong has 21 economic and technological development zones and is planning to set up more industrial parks.

Major cities in the province include Guangzhou and Shenzhen – the world’s largest manufacturing hub and home to Foxconn, one of Apple’s largest suppliers as well as other key tech businesses, such as Tencent, Huawei, and ZTE.

Guangdong is also known for its advanced infrastructure, well-developed traffic and communication network, and a convenient customs clearance process that makes it a favored destination in China.

However, Guangdong’s growth has been stunted of late, in part due to the US-China trade war. Last year, the provincial government announced a series of investment incentives to offset the impact of the trade war. The measures, outlined in the Policy Measures for Expanding Opening up and Using Investment, detail a 10-point plan to attract foreign investment and open market access.

These include setting up wholly foreign-owned enterprises for drones, aircraft, and other high-tech industries with cash rewards of up to US$14.59 million for certain investments as well as free land use for major investment projects.

Foreign investors and domestic Chinese companies highly appreciate China’s production capabilities and place considerable value on its deep talent pools, top-tier infrastructure, and excellent sourcing networks. It is in this context that investors are choosing to supplement Chinese operations, with inputs from production facilities in Vietnam, for example, rather than exiting China.

This has already begun with several government and business delegations from Guangdong visiting Quang Ninh since 2009. As a result, at least 22 Guangdong businesses have invested in projects in Quang Ninh. Most recently, Foxconn announced its plans to set up a television screen assembly plant in Dong Mai industrial park in Quang Ninh with an initial investment of US$40 million.

In addition, Vietnam is likely to gradually resume international flights with countries that have contained the pandemic. Countries such as China and South Korea, which appear to have a grip on the virus are likely to be contestants, particularly as Chinese tourists accounted for 30 percent for foreign arrivals in 2019.

Both Guangdong and Quang Ninh are great locations for potential investors but vary due to different cultural, infrastructure, and leadership environments. However, by situating manufacturing centers close to traditional hubs, such as Guangdong in China, investors can reduce costs with limited interruption or delays to current existing supply chains.

Given Quang Ninh’s positive record as an established business center in Vietnam, it is an ideal location to be considered by firms with operations in manufacturing hubs like Guangdong, who are planning to relocate or supplement their main operations.