The global automotive industry is undergoing a paradigm shift at present in trying to switch to alternative/less energy intensive options. India, too, is investing in this electric mobility shift.

The burden of oil imports, rising pollution, and as well as international commitments to combat global climate change are among key factors motivating India’s recent policies to speed up the transition to e-mobility.

The Indian automotive industry is the fifth largest in the world and is slated to be the third largest by 2030. Catering to a vast domestic market, reliance on the conventional modes of fuel intensive mobility will not be sustainable. In an effort to address this, federal policymakers are developing a mobility option that is “Shared, Connected, and Electric” and have projected an ambitious target of achieving 100 percent electrification by 2030.

By making the shift towards electric vehicles (EVs), India stands to benefit on many fronts: it has a relative abundance of renewable energy resources and availability of skilled manpower in the technology and manufacturing sectors.

According to an independent study by CEEW Centre for Energy Finance (CEEW-CEF), the EV market in India will be a US$206 billion opportunity by 2030 if India maintains steady progress to meet its ambitious 2030 target. This would require a cumulative investment of over US$180 billion in vehicle production and charging infrastructure.

Regardless of the country’s ambitious targets, India’s EV space is at a nascent stage. However, looking at it differently – India offers the world’s largest untapped market, especially in the two-wheeler segment. 100 percent foreign direct investment is allowed in this sector under the automatic route.

This week, Ola Electric, the subsidiary of the unicorn Indian ride-hailing start-up, also announced that it would be setting up the world’s largest electric scooter plant in Hosur (which is a two and a half-hour drive from Bengaluru) over the next 12 weeks, at a cost of US$330 million, and aiming to produce 2 million units a year. By 2022, Ola Electric wants to scale up production to pump out 10 million vehicles annually or 15 percent of the world’s e-scooters.

Recently, Sterling and Wilson Pvt Ltd (SWPL), India’s leading engineering, procurement, and construction company announced its entry into the electric mobility segment in India. It has signed a 50-50 joint venture with Enel X, to be incorporated on April 1, 2021, to launch and create innovative charging infrastructure in India.

The key reasons why these states are doing better than others are local fiscal sops, better logistics, an investor-friendly government policy, business facilitation through easier access to authorities, supply chain connectivity, and the availability of suitable land.

Karnataka was the first state to introduce a comprehensive EV policy and has emerged as a hotspot for EV businesses in India, both in EV and EV ancillary manufacturing as well as R&D segments. Tamil Nadu is also leaping forward at a commendable pace, owing to its supply ecosystem, larger land parcel, proximity to ports, and proactive investor support through administrative portals like Guidance Tamil Nadu.

Nevertheless, while growth in the EV industry is on an upward tick, it has much ground to cover to be able to realize the government’s ambitious 2030 target. The COVID-19 pandemic not only slowed the industry’s progress, but also dampened overall market demand.

Still, market sentiment has retained positivity in some segments. In FY 2020, EV sales for two-wheelers in India increased by 21 percent. For EV buses, the sales for the same period increased by 50 percent. In contrast, the market for electric cars remained grim, registering a five percent decline. As for total EV sales, after suffering an initial setback in 2020, sales appear to be slowly picking up. In January 2021, 15,910 units of EVs were sold in India, and out of these, the maximum units were sold in Uttar Pradesh, followed by Bihar and Delhi. 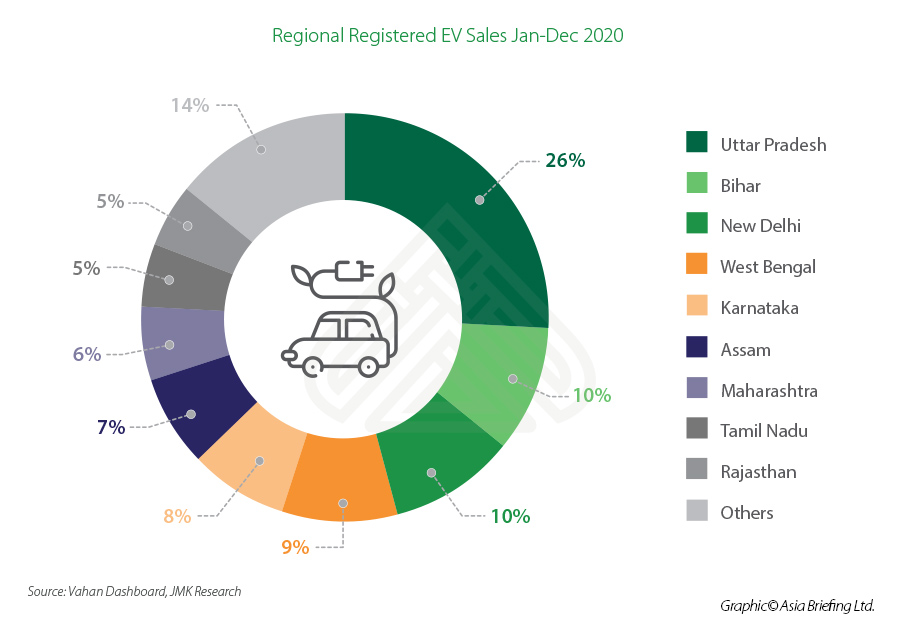 In April 2019, Niti Aayog, the federal think tank, published a report titled “India’s Electric Mobility Transformation”, which pegs EV sales penetration in India at 70 percent for commercial cars, 30 percent for private cars, 40 percent for buses, and 80 percent for two- and three- wheelers by 2030. These targets, if achieved, could lead to a net reduction of 14 exajoules of energy and 846 million tons of CO2 emissions over the deployed vehicles’ lifetime. Electric vehicles sold until 2030 can cumulatively save 474 million tons of oil equivalent over their lifetime, worth US$207.33 billion.

This will help India fulfil its global commitments to lower carbon emissions and increase use of cleaner sources of energy and transportation as required by the Nationally Determined Contributions (NDCs) under the United Nations Framework Convention on Climate Change (UNFCCC) and EV30@30.

Several fiscal and non-fiscal measures have been put in place to facilitate the adoption of electric mobility. They are as follows:

As of today, 27 states and UTs have formulated strategy plans for transforming mobility to provide their citizens with safe, inclusive, economic, and clean transport options. While some states like Karnataka and Tamil Nadu have had a head start due to preplanned public policies, targeted investor incentives, as well as support infrastructure, other states too have drafted policies to stimulate market demand and create infrastructure.

Ultimately, the scope of India’s EV market growth rests on availability of capital for original equipment manufacturers, battery manufacturers, and charge point operators as well as improvements to infrastructure and diversified options for consumers.