With many parts of the economy now stabilized, and the COVID-19 vaccine roll-out underway, the Chinese government is cautiously optimistic about the direction and scope of the country’s full recovery.

For much of 2020, Chinese policymakers were consumed with containing the coronavirus outbreak and mitigating its economic fallout. However, by the end of 2020, we began to see the revival of long-term policy goals and national strategies and a steady shift from reacting to planning.

2021 marks the year of key milestones for China – it is the starting point for the 14th Five-Year-Plan and the centenary anniversary of the Chinese Communist Party (CCP). Market watchers should expect policy agendas amplified to meet long-running targets that will match the sense of occasion.

In this article, we reflect upon what has transpired on the road to recovery, important policy commitments, economic adjustment strategies and what to expect in the next 11 months.

China staged an impressive recovery in 2020 – exhibiting a 2.3 percent GDP growth, despite prolonged lockdowns and a nationwide economic lull in Q1.

Foreign trade totaled RMB 32.16 trillion (US$4.96 trillion), an increase of 1.9 percent from the previous year. This was driven largely by exports of medical supplies and masks, which drove the first uptick in April. Further, fixed asset investment increased by 2.6 percent in the same period.

However, not all sides of China’s economy recovered at the same time. While investment and exports rebounded relatively quickly, the recovery of domestic consumption lagged. Private consumption – which is closely tied to disposable incomes along with people’s willingness to go out to eat, travel, shop – experienced a drop of 4 percent in 2020, while private investment was slow to recover and only presented a 1 percent growth in 2020.

In 2021, continued economic recovery is expected lower unemployment rates, shore up consumer confidence and allow offline consumption to return to normal. Further, the tertiary industry’s added value and the growth of fixed asset investment are expected to continue their upwards trend.

Over the next 11 months, China will continue to rebalance its economy and push out long-term reforms. This will be underpinned by the theme of ‘continuous, stable, and sustainable’ growth set forth at the Central Economic Work Conference (CEWC) – the main economic agenda-setting event for 2021.

Consistent with the CEWC and 14th Five Year Plan, policymakers will proactively endorse and implement structural reforms, which will consolidate the supply-side reform measures (adopted since 2015) while ushering in the newly-introduced ‘demand-side reforms.’

This, of course, will be guided by the ‘dual circulation strategy’  which refers to a parallel emphasis on ‘internal’ and ‘international’ circulation. Simply put, this means:

We will likely see the dual circulation strategy play out in mega-regions, such as the Yangtze River Delta, as well as economic policies that aim to stimulate the domestic economy through innovative measures ranging from subsidies for replacing old home appliances to slashed taxes on used cars to make purchasing new items accessible to all consumers.

In 2020, China walked a fine line between offering financial lifelines to individuals and businesses amid the pandemic, and not further exacerbating the country’s burgeoning debt.  At the beginning of the year, China committed to reducing business expenses by over RMB 2.5 trillion (US$390 billion) over the course of the year, including RMB 500 billion (US$77 billion) in new tax and fee cuts.

As the year rolled on, Chinese authorities continued to implement a myriad of different support policies for businesses – ranging from rent waivers and social security exemptions to streamlined customs processes, among others.

2021 will certainly witness a gradual rollback of these measures, such as the reversal of social insurance exemption in Beijing. A similar fate awaits China’s monetary policy as the government retreats from the sharp expansion in credit introduced at the beginning of the COVID-19 outbreak. However, both monetary and fiscal policies will likely remain accommodative so long as the pandemic risk is present.

According to China’s central bank governor Yi Gang, the People’s Bank of China (PBOC) will prioritize a stable monetary policy in 2021, and any steps to reduce stimulus measures would have gradual impact on the economy.

Meanwhile, the PBOC pledged to strengthen its financial support for technology innovation, private companies, and small and micro-sized enterprises, as outlined in its Key Tasks for 2021. One example of this, is the extension of the credit support plan for small businesses, which allows principal interests and repayments on inclusive loans to be postponed – a policy announced by Premier Li Keqiang on December 21, 2020.

The challenge this year is for China to continue to strike a balance between kickstarting economic reforms and not stifling growth.

Notwithstanding the slow start to the year, 2020 remained a productive year for China by way of reform and opening-up.

Major winners were those operating in the advanced manufacturing, modern services, and agriculture industries as well as those looking to investing in the central, western, and northeastern regions of China.

Interestingly, the Cross-Border Service Trade Negative List, which was signposted for a 2020 release, never came to fruition. This list is the first of its kind and will open the services sector – it is one to look out for in 2021. 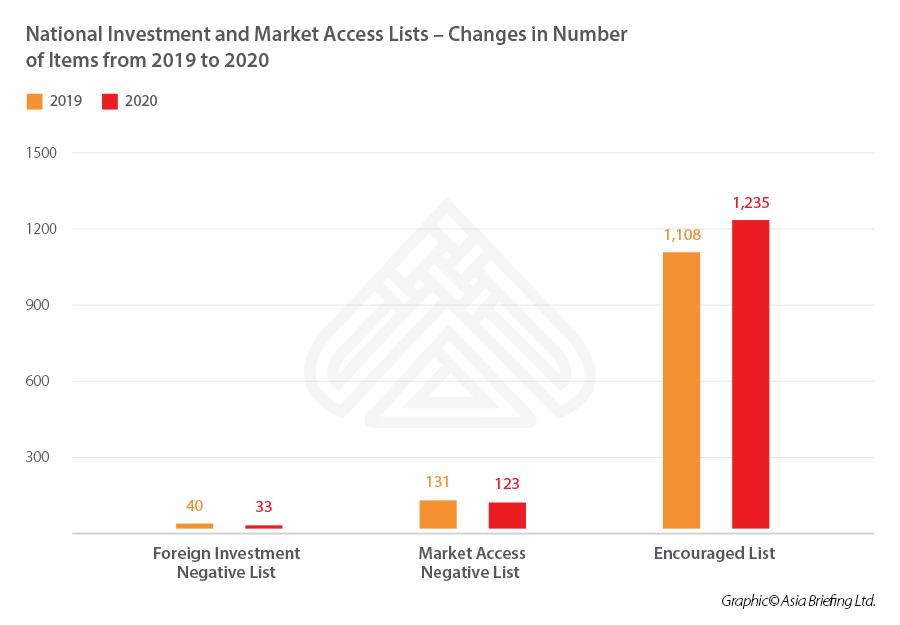 Also central to China’s plans of market opening is the construction and expansion of free trade zones (FTZs) across China. In 2020, China established three new free trade zones in Beijing, Hunan, and Anhui as well as extended the existing FTZ in Zhejiang. These FTZs offered businesses incentives such as tax cuts or streamlined customs clearance, which are to be replicated and scaled-up at a national-level if they are successful.

However, it was the unveiling of the Hainan Free Trade Port Masterplan that conjured the most excitement. The new free trade port announced in June 2020 established the largest special economic zone in China, which saw import duties scrapped, income tax rates lowered for high-level talents, and the corporate tax capped at 15 percent.

Hainan continued to roll-out many favorable policies throughout the year, particularly in the areas of technology, healthcare, and trade. Some key highlights were the announcement of the annual tax-free shopping quotas,  the expansion of the special anti-cancer medicine insurance, and the release of the island’s first “Zero Tariff Positive List.”

In February 2021, the Special Negative List for the Hainan Trade Port (2021 Edition) will come into effect, which will introduce further measures to promote opening-up in crucial areas, such as value-added telecommunications, education, commercial services, manufacturing, and mining industries.

The COVID-19 outbreak affected most if not all, industries. Some sectors boomed, while others were forced to adapt. All the while, trends towards digitalization and automation rapidly accelerated.

The 14th Five-Year-Plan and Central Economic Work Conference Report stated that in 2021 China will stabilize the proportion of manufacturing while hastening the development of the digital and services economy.

Atop the agenda is investing in high-end manufacturing to build indigenous capacity in technology and innovation.

We have already started to see this come to shape through:

Tangential to this growth is China’s burgeoning digital economy.

The introduction of 46 new cross-border e-commerce zones in 2020 is evidence of China’s rapidly expanding internet economy. The approval of the new zones effectively doubled the number of e-commerce zones in the country in one year, and substantially widened the net of preferential policies available to businesses.

However, production and trade of goods were not the only sectors to garner government support last year. The services industry also received a major boost, most visibly through the opening of Beijing’s services industry zones in September 2020, which provided a testing ground for the reform of nine key services industries.

Alongside the needs of developing the real economy, China placed a great deal of emphasis on the financial industry.

In fact, 2020 become somewhat of a milestone year for the financial services sector – with the caps on foreign ownership of securities companies, securities investment fund management companies, futures companies, and life insurance companies all lifted. The liberalization was further promoted in the Greater Bay Area , Shanghai, and Beijing regions.

Moving forward, we will likely see the recovery of more services industries such as –  tourism, film, and sports. Sectors that received a boost in 2020, such as healthcare and financial services, will likely see further digitalization and accelerated adoption of innovative measures.

Another priority for China in 2021 is the reinforcement of anti-monopoly behavior and preventing the disorderly expansion of capital – a point emphasized in the recent CEWC Report and again in the Central Bank’s Key Tasks for 2021.

Tighter controls have coincided with the exponential growth of the country’s technology industries, triggering the first overhaul of China’s antitrust guidelines in 11 years.

Towards the rear-end of 2020, high-profile probes dominated headlines. An investigation was launched into Alibaba Group Holdings Limited over the monopolistic practice of forcing merchants to choose to work with one platform at the exclusion of others. Shortly after, regulators ordered Alibaba’s affiliate company, Ant Group Co. Ltd, to restructure its lending, insurance, and wealth management services into a new more tightly regulated holding vehicle.

More of this regulatory tightening is expected in 2021, when the final version of the Guidelines for Anti-Monopoly in the Platform Economy is released. So far, the draft guidelines are shown to have more ‘teeth’ – to compel large tech firms to take corrective action and allow more small players to operate in the growing digital market.

However, these antitrust laws and regulations are not operating in isolation as market scrutiny is on the rise on many fronts. Last year also saw China simultaneously revise its Copyright Law and Patent Law to provide more legal certainty and strengthen protections for businesses. Within the area of technology trade, China imposed new restrictions on tech exports – a response to similar measures applied by the US – which has resulted in additional licenses mandated for future exports.

China’s new personal data protection law, expected to be released in 2021, is yet another example of efforts to introduce centralized and standardized law enforcement measures for businesses. The new law will operate on top of existing cybersecurity and national security requirements and is set to offer more explicit opt-ins for collecting data, restrictions on selling data to third parties, and government approvals for cross-border data transfers.

2021 will be a promising year by most accounts, punctuated by the release of the 14th Five-Year-Plan in March and the 100th anniversary of the CCP in July.

However, as the country prepares to turn a new page on COVID-19, it must also be ready to confront new challenges that will certainly take its place. Ongoing bilateral tensions, K-shaped economic recovery, and achieving technology self-sufficiency are likely to be some of the challenges that will beset China in the foreseeable future.

Nonetheless, overshadowing these challenges will be the return of innovative and long-term reform plans, and further opportunities for growth. Already, early estimates put China’s economic growth at 8.2 percent in 2021.

In the coming months, investors can expect a balance between further opening in the services sector, expansion of regional economic development zones, and stricter enforcement of rules for businesses operating in the Internet economy.

Further, in 2021, Beijing will also take aim at strengthening weak links in the supply chain – in order to strengthen national tech capacity and achieve food security.

Though a multitude of announcements offer glimpses into how China’s leaders view their most pressing economic challenges and plans to overcome them, the speeches and plans should be consumed with a pinch of salt.

Investors can expect stabilization measures to continue, sector and location-specific incentives to stimulate industry and attract talent pools and inflow of high-tech. However, this will be accompanied by higher regulatory thresholds and industry scrutiny – businesses should keep track of China’s new laws, policies, regulations and remain nimble to any changes that may occur.