On December 23, China’s Customs Tariff Commission of the State Council announced it will temporarily adjust import tariffs on 859 commodities to come into effect January 1, 2020.

The adjusted tariffs will be lower than that of the most-favored-nation (MFN) tax rate in 2020. It will predominantly affect three categories of goods – consumer goods, raw material for pharmaceutical goods, and raw material for manufacturing of high-tech goods.

To many observers the move underlines the needs of China’s current stage of development. Strategically chosen by Beijing, the import items targeted either fill the gap in domestic production or capability as China accelerates its plans to advance its manufacturing and service industries.

Less than two weeks after China and the US reached a Phase One deal in their ongoing trade negotiations, China appears to be signaling that it is serious about diversifying its global trade relationships even as it pursues a full deal with the Trump administration.

The reduced tariffs also show China’s willingness to further open its economy in order to match the growing needs of businesses affected by the trade war. This year, China enacted similar tariff cuts covering 706 products; this newly proposed list will include 153 more products than the previous year.

However, the tariff quota management system for commodities, such as wheat, fertilizer, corn sugar, and wool will remain the same.

What items will be affected by the adjusted import tariffs?

The lowered tariffs are intended to stimulate import potential in key areas where China faces a “relative domestic shortage”, or where there is a “high demand for foreign specialty goods “ as stated in the announcement made by the Finance Ministry.

For example, the list reduces the import tariffs on frozen pork from 12 percent to eight percent to boost domestic supply and stabilize pork prices. China is currently grappling a crisis in its domestic pork supply due to the outbreak of African swine fever since August 2018 causing a surge in pork imports. Between January to November this year, China’s pork imports amounted to 1.73 million tons, up 58 percent from the previous year.

In addition, China will lower tariffs on raw material for medication for conditions such as diabetes and asthma to reduce medicine costs and to promote the production of new medicines to better satisfy the needs of its aging population.

The country will also introduce or cut provisional import tax rates for commodities, such as ferroniobium (used as an additive for high strength low-alloy steel in oil and gas pipelines and trucks) as well as expanding the import of advanced technologies equipment and spare parts for the continued development of high-tech industries. To complement this, basic raw material, such as wood and paper products, will also be subject to lower or provisional import tax rates.

China’s economy is expanding at its weakest rate in nearly 30 years and could face more downward pressure next year. As a response, the government is introducing new measures and tax cuts to keep growth within a reasonable range come 2020.

These provisional tariff reductions are good news for Chinese businesses, consumers, and foreign exporters alike. Chinese businesses are able to benefit from the lowered price of these products while Chinese consumers will be able to access these foreign specialty products.

More importantly, the tariff reductions facilitate the coordinated development of China’s trade environment at a broader level – supporting the qualitative development of the country’s free trade zones and the strengthening its developing Belt and Road Initiative trade networks.

Below is a table of some of the goods affected by these reduced tariffs. 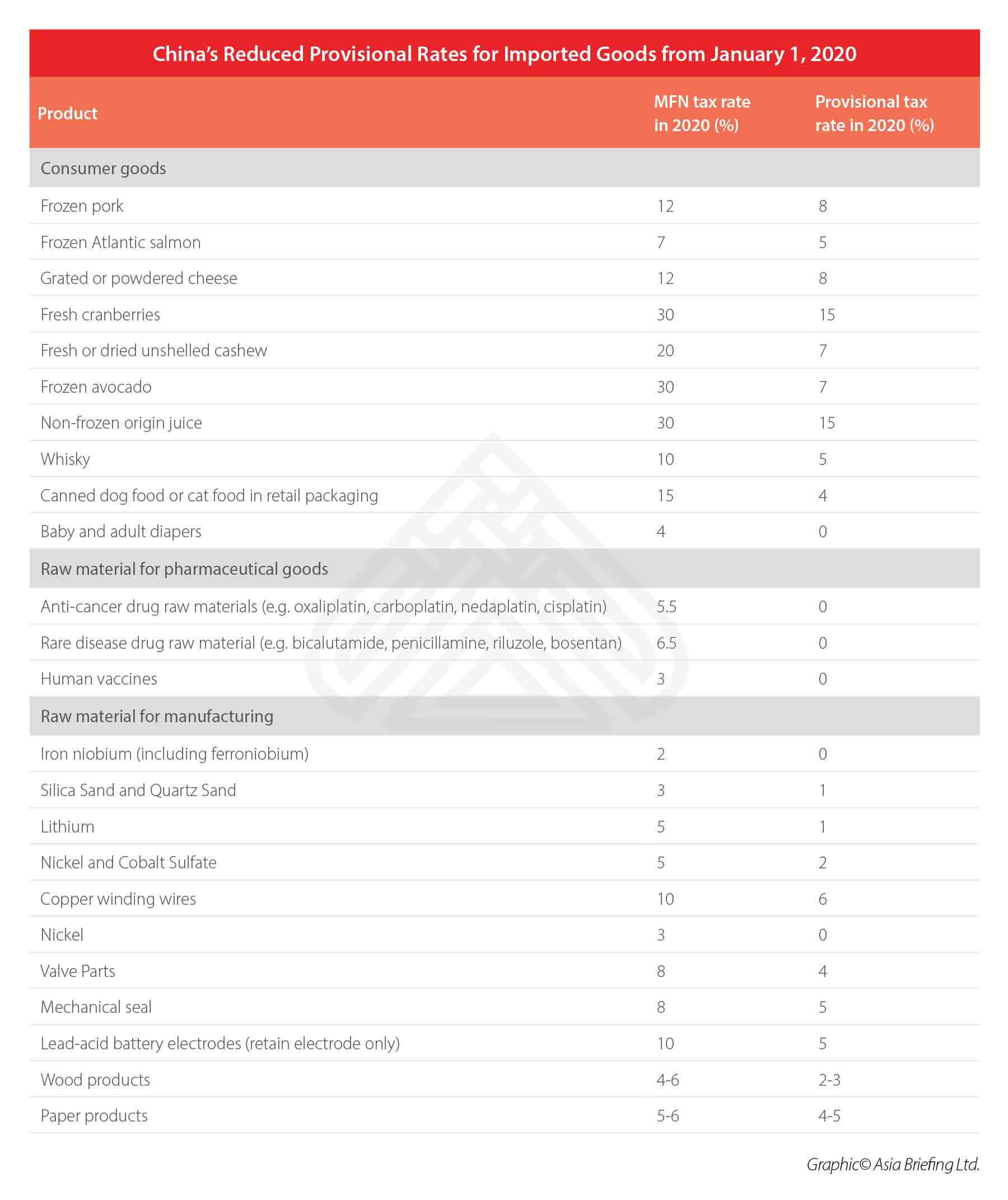 How to Operate Your China Business Remotely during the Coronavirus Outbreak

By Adam Livermore and Thomas Zhang With the current […]