A Closeup View of China 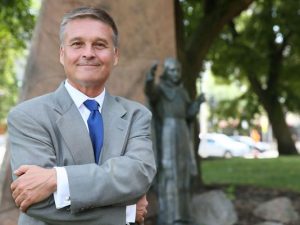 Joseph Jurken was in his early 20s when his father, Edward Jurken Sr., sent him to China to scout for tennis shoe factories that would have interest in buying leather produced by the family’s business, Badger State Tanning Corp., in Milwaukee’s Menomonee River Valley.

In many ways, it was a different time and a different world. Leather tanning was still one of Milwaukee’s primary industries. Leather shoemakers such as Nike were just beginning to dominate a lucrative new industry. Communist China was in the very early stages of entering a global economy with any type of free market enterprise.

The world would soon change for China. The shoemakers realized that they could cut costs by building tanneries next to the shoe factories in China, rather than importing the leather from America.

By 2001, the Milwaukee tannery was closed.

However, Jurken’s adventures and ventures in China were just beginning.

Fast forward to today. Jurken is the founder and senior partner of The ABC Group LLC, a Milwaukee-based consulting company that helps Wisconsin businesses facilitate commerce in China and other Asian markets.

Jurken estimates that he has visited China more than 200 times over more than 25 years in his career.

About 85% of his company’s customers are American companies importing goods and materials from China, while about 15% tap Jurken’s expertise to help them export goods to China.

Those percentages help explain why the United States had a record $365.7 billion trade deficit with China in 2015, according to the U.S. Census Bureau.

“We believe that free trade makes the world go round,” Jurken said. “We facilitate commerce. That’s a good way to put it. That’s what we do. We help them manage their supply chain in China and broaden their supply chain.”

Over the years, Jurken has witnessed the “Americanization” of China. Good and bad. The industrialization has led to notorious air pollution in China’s largest cities. However, Jurken notices the air is less toxic on weekends as more Chinese people and companies have slowly embraced the American organized labor concept of taking two days off to recover from the workweek.

1. Stick to your game plan. “Many Chinese companies are very highly qualified suppliers. Continue to apply the same business practices with them as you would with companies in the United States. Aim high as you normally would, since qualified companies can deliver what’s needed,” Jurken said.

2. Proactively mitigate risk. “Don’t wait for problems to happen and then react. Instead, add qualified secondary suppliers to the mix. Shore up essential personnel at home and in China in case someone decides to call it quits. Brush up on customer complaint protocols and procedures,” Jurken said.

3. Don’t rush to create joint ventures. “Continue using contract manufacturers rather than forming a joint venture. It’s what companies like Nike and Apple do because they know it avoids potential losses, saves money and provides needed flexibility,” Jurken said.

Next week in this column, we’ll explore Jurken’s tips for effective exporting of goods and materials from Wisconsin to China.

Steve Jagler is the business editor of the Milwaukee Journal Sentinel. Send C-Level ideas to him at steve.jagler@journalsentinel.com.